The Sami are the indigenous people of the High North regions of Norway, Sweden, Finland and Russia. In total there is about 80.000 Samis – about half of whom live in Norway. Despite the fact that our modern society has challenged the ancient Sami culture numerous times, it is still going strong and is even experiencing a renaissance amongst the younger generations.

The Sami are descendants of nomadic people who settled in Northern Scandinavia thousands of years ago. To get to know the Sami people, it’s natural to start with their language. Or should we say languages. Because there are a grand total of nine(!) different, but closely related Sami languages in use today. Three of these languages are the predominant ones amongst the Sami in northern parts of Norway. Sami languages are members of the Uralic linguistic group of languages such as Finnish, Estonian and Hungarian, and are very different from Norwegian and other language of Indo-European origin

Life in Touch With Nature

Sami people have always felt close to nature, which is basically the foundation of their society. Throughout history, animals have been their main source of food and income. Back in the days they were hunters, they were farmers, they were fishermen and last but not least, they were reindeer herders. Today around 2600 of the Sami population in Northern Norway make a living or supplement their income through herding reindeer, while most people have adopted a modern lifestyle and have modern jobs.

Sami handcraft traditions are another strong feature of their iconic culture. The traditional gákti, in Norwegian called kofte, is today mostly used for dressing up for celebrations and special occasions. Unlike the Norwegian bunad, it is totally acceptable to modernize it in line with trends and fashion. Topaz of Norway and Swedish Kero are modern shoe manufacturers who make trendy leather boots based on Sami traditional footwear. Hand-made knives, wood carving, tin- and pearl embroidery, woven shoelaces and jacket seams are other examples of Sami handcrafts that have survived in a modernized society.

The joik is a Sami song tradition, normally dedicated to a person, an animal or a place, that has strong roots in the Sami culture. Being one of the oldest song traditions in Europe, it is still going strong and is used in both traditional and in more modern ways. In the Eurovision Song Contest in 2019, The Norwegian group Keiino received the most votes from people all over Europe with their song “Spirit in the Sky”. The song was a mix of English lyrics and Sami joik, performed by Fred Buljo.

Numerous music and filmmakers with Sami roots have contributed to spread glimpses of Sami lifestyle and culture within the Scandinavian countries, and abroad. Singers such as Mari Boine, Ulla Pirttijärvi and Jon Henrik Fjällgren have gained popularity far outside the Sami regions. With their feature films Veiviseren and Sami Blood, Nils Gaup and Amanda Kernell are examples of film directors who have gained international recognition for their storytelling and portrayal of the Sami way of life. 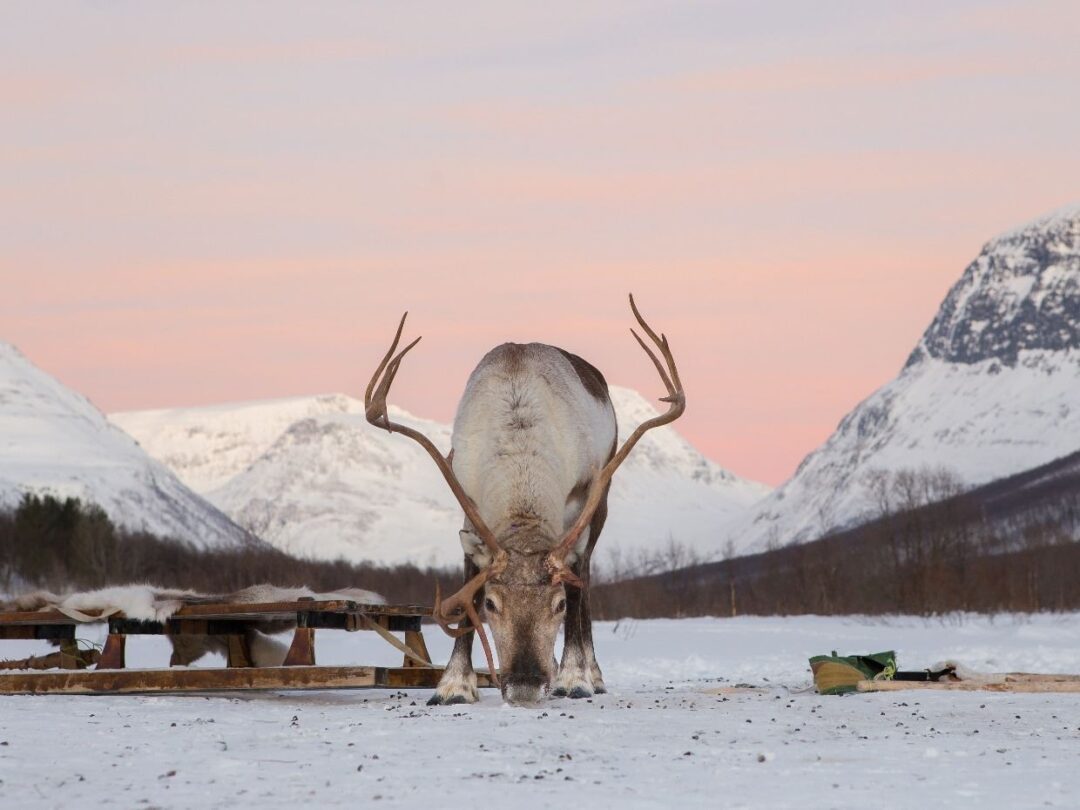 Only 75-minutes from Tromsø City Centre you can enter the magical winter wonderland of Camp Tamok. Here you can participate on a full day adventure including reindeer sledding, lasso throwing, storytelling about the Sami culture and feeding the reindeer. You can choose between our daytime or evening departure.To go reindeer sledding is this environement is a raw and unique experience.

At Camp Tamok the ambition is to give travelers a feeling of the authentic north. Most people who visit Camp Tamok come by bus from Tromsø – picked up by the camps own buses –They attend some stunning activities, have a hot meal and return to the Arctic Capital later the same day.

Suppressed by the Norwegians

Like many other small indigenous groups around the world, it has not always been easy to be Sami in Norway. As many of their former regions were found to be rich in natural resources and had Ice-free harbours, they were pushed further north and further inland in the 1800s. Beginning about 1850, the Sami people were subjected to a fierce Norwegianizing policy that originated in ideological ideas such as nationalism. The Sami were basically told to learn the Norwegian language and to become Norwegians.

From 1888 the Sami language was only used as an second language in Christian education. In the Land Sales Act of 1902, it was concluded that only Norwegian residents who were spoke, read and wrote Norwegian in their day-to-day life, were eligible to buy land. Areas of land that were bought could have only Norwegian names.

Elsa Laula Renberg (1877-1931) was of great importance for Sami rights. A woman of both Swedish and Norwegian heritage, she devoted her life to the battle for Sami language, culture and rights. In 1917, she led the Sami assembly in Trondheim, the first step in a long struggle for civil rights.

It was not until 1989 during the opening of the first Sami Parliament in Karasjok, that The Norwegian authorities issued a public apology to the Sami people:

"Today we must apologize for the injustice that the Norwegian state has previously inflicted on the Sami through a rough Norwegianizing policy.” – King Harald

Fortunately, Sami people today are very proud of their culture and heritage, and they keep their traditions alive by passing them on to younger generations. As global warming and habitat degradation accelerate, all of us, now more than ever before, have a lot to learn from the Sami. They have the traditional ecological knowledge. They have the most precise knowledge about the weather conditions, about the plants, the diet and resources. The Sami people have the most ethical relationship with nature. This is exactly the knowledge we need to spread throughout the world today.