Best Things to do in Kirkenes

Kirkenes offers epic adventures above the Arctic circle! Located in the far northeast in Northern Norway, Kirkenes has a range of memorable experiences to offer. This small town is the ultimate spot for anyone whose main goal is to explore the real Arctic.

Go for a relaxing dog sledding adventure during daytime and take in the beautiful landscape as your new fluffy friends whisk you away through the snow. Choose an evening departure for a chance to spot the Northern Lights dancing in the sky above you. When Lady Aurora makes her appearance the dog sledding adventure becomes even more memorable.

Snowmobiling in the Pasvik Valley

Go fishing for monsters and feast like a king! The red king crab is a massive creature that can get up to two metres (about 6,5 feet!) from leg to leg. Each leg is bigger than a lobster and full of delicious, juicy crab meat. Venture out to the fjord ice on a snowmobile sled, and pull the crab pots on land through a hole in the ice – this is truly taking the concept of a fresh meal to the next level! During summer you can go out on a speedy rib adventure and pull the crab pots into the boat. Back on land you’ll be served a proper king crab meal – the freshest crab you’ll ever come across.

Go further into the wilderness, for a full arctic dog sledding adventure!

Are you ready to catch the Arctic wind? Snowhotel Kirkenes offer Snowmobile excursions with several departures every day. We go far into the Pasvik Valley to the Russian border at the Pasvik River, through beautiful forest landscape, and in the end you are only metres away from our great neighbour in the east.

Snow, Northern Lights and the king crab are three things that are a must on an Arctic winter holiday.

Visit the magical wonderland of Snowhotel 365! Your arctic fairy tale is about to come true.

On the Aurora Express tour; our driver will take you far from the light pollution.

Enjoy untouched Arctic nature around you as you marvel at the Lyngen Alps and learn more about the Sami culture and reindeer.

Prices from 1295 NOK
See all experiences

Snowhotel Kirkenes – a magical hotel made of snow and ice

Up for a cool adventure? Snowhotel Kirkenes – a hotel completely made of snow and ice – keeps open all year. During summer you can walk from the green lush nature into a magical winter kingdom and see stunning ice art light up in different colours. For the full icy experience you can spend the night on a block of ice tucked into a warm and cosy thermal sleeping bag, resting on a soft and warm reindeer skin. 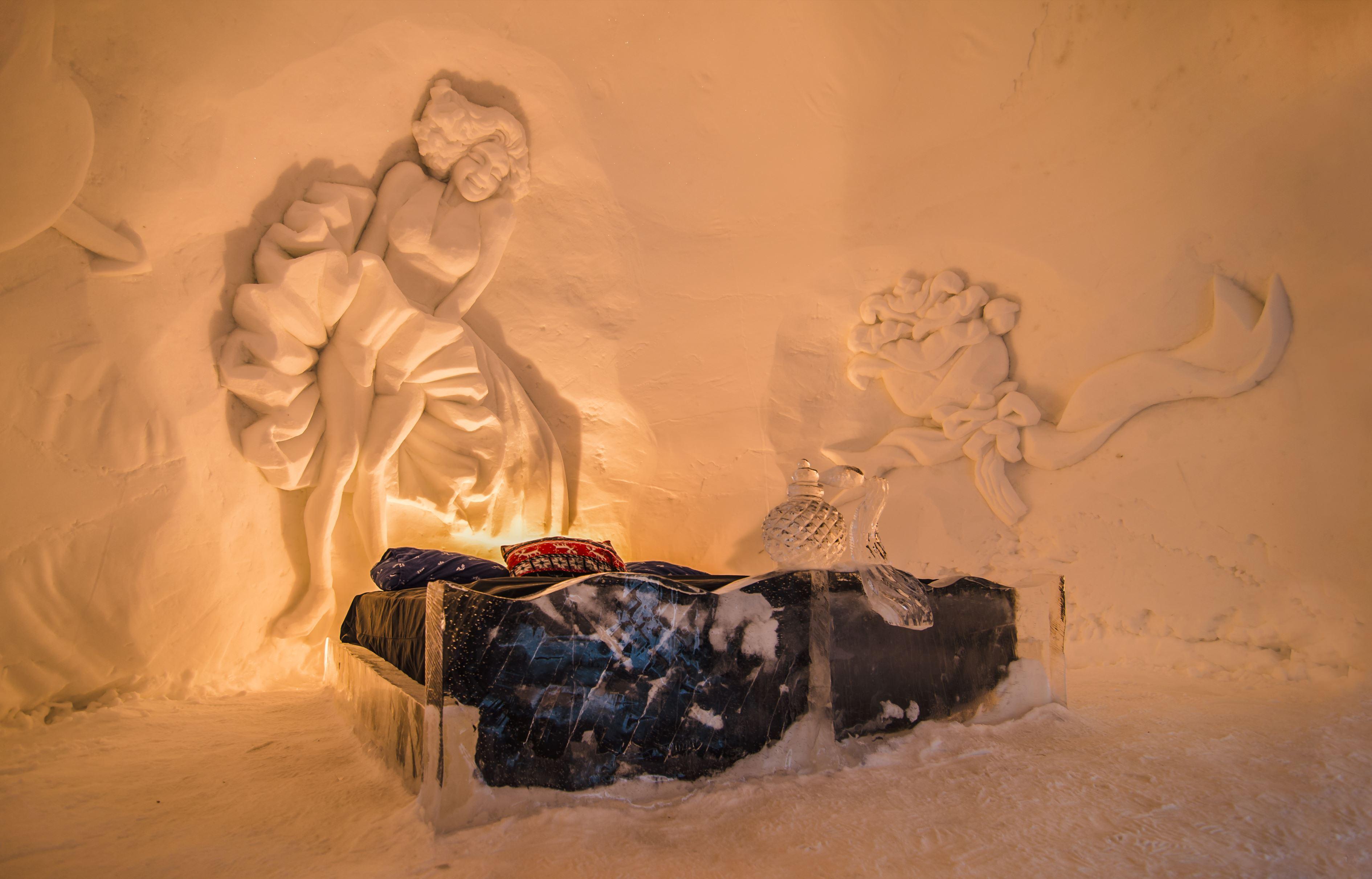 For the rest of your stay you can stay warm and comfortable in one of the wooden cabins – imitations of the authentic Sami Gamme cabins and complete with modern amenities.

While staying here you’ll have the top Kirkenes highlights available tight at your doorstep. Daily dog sledding, snowmobile and king crab tours that start right right nearby. Breakfast, lunch and dinner is included in your stay – ending with a splendid 3 course meal based on a local menu. Any spare moments can be spent visiting the happy dogs at the husky yard or feeding the reindeer. Read more about the ice hotels in Norway.

Located in the centre of Kirkenes, the Andersgrotta Bomb Shelter served as a refuge asylum for civilians during World War II. There were more than 300 air attacks in Kirkenes during this time making this cave an important piece of history in the area. In Andresgrotta you can watch a film based on old records and new recordings and learn more about what it was like in Kirkenes during the war.

Learn the history of the region as a border area and meeting place. Take a look at the exhibitions connected to industrial construction, war history and the daily life and history of people living in this area. Pop by the museum shop or have a bite to eat the the café. Outside you will find benches, a playground and an exciting labyrinth to explore in summer.

In memory of the Red Army who liberated Kirkenes in 1944 this is a historical landmark worth a visit. During World War II Kirkenes was one of the most bombed areas, with over 300 air attacks. Kirknes was liberated by the Red Army in October 1944 where only 13 houses remained in the town. The memorial was erected in honour of the brave Soviet soldiers that liberated Kirkenes.

Learn all about the special nature, wildlife, culture and history of the Pasvik Valley. At this centre you can take a closer look at exhibitions presenting the primal forest in the national park and the characteristics birds and animal species that live her.

Bordering Finland in the West and Russia in the east. Pasvik Valley has the biggest brown bear population in Norway. Therefore the brown bear has been given a prominent place in the exhibition. The centre is surrounded by a beautiful botanical garden and natural trails and also offers accommodation – single and double ensuites.

A Summer Adventure in Kirkenes

If you don’t want to brave the Arctic cold weather a summer adventure might be more up your alley. Enjoy the endless summer nights with the midnight sun hanging in the sky at all hours.

Visit the snow hotel and experience the winter magic in the middle of summer! Go on a rib safari and fish for king crab or go dog sledding on wheels.

Kirkenes is the last stop on the Hurtigruten coastal route. An epic journey along the Norwegian coast filled with culture, adventures and Northern Lights experiences is the perfect warm up for a thrilling Arctic holiday in the Barents capital.

Sleeping in an Ice Hotel

How to get from Oslo to Kirkenes